Inspired by origami, the full-size sculpture was produced as a celebration of the human craftsmanship behind each Lexus car. London-based companies LaserCut Works and Scales and Models were commissioned to complete the project, which took three months in total to finish. The studios were provided with a 3D model of the existing IS saloon, which they then divided into principal parts, including the main body, dashboard, seats and wheels. These sections were digitally rendered as 10-millimetre slices, then laser cut from the cardboard and given individual reference numbers to ensure the car was assembled in the correct sequence.

Every layer was fixed together by hand using a water-based wood glue, which had to be left to set for 10 minutes after each application. "This was a very demanding job, with five people involved in the digital design, modelling, laser cutting and assembly," said Scales and Models founder and director Ruben Marcos. An electric motor used to power the vehicle is mounted on a steel and aluminium frame is housed within the model. The car also features a fully fitted interior, functioning doors, headlights and rolling wheels. "The seats took a few attempts to get just right and the wheels required a lot of refining," said Marcos. "Once we could see the physical pieces taking shape, we could identify where we needed to make improvements." "As with anything, there were some elements of trial and error, but as we had all the resources we needed in-house, this made the changes easier to produce," he continued. The cardboard Origami Car will be on show as part of the Grand Designs Live event at the National Exhibition Centre (NEC) in Birmingham, UK, from 8 to 11 October 2015. Earlier this year, Lexus revealed its Back to the Future-style hoverboard, which uses magnetic fields to carry its rider without touching the ground. Cardboard has previously been used to create a waterproof bicycle that costs less than £10 to manufacture. 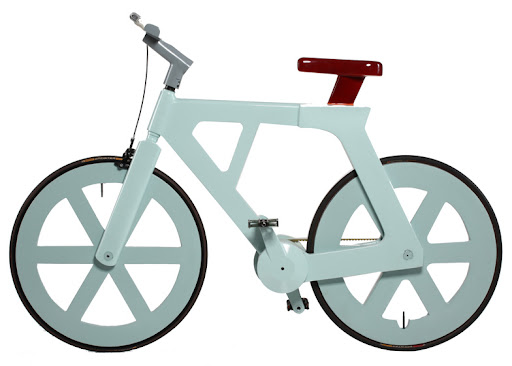 Izhar Gafni started developing the Cardboard Bicycle three years ago. "Since there was no know-how with regards to the cardboard material, the first two years were devoted to learning the properties and behaviour of the material," explains Gafni.

Cardboard Bicycle by Izhar Gafni from Dezeen on Vimeo.

Above: movie by Giora Kariv
Cardboard Bicycle by Izhar Gafni from Dezeen on Vimeo.

"The idea is like Japanese origami," he says in the movie. "You fold it once and then it doesn't become twice the strength, it's almost three times the strength. So I took it from there and did the same thing with cardboard. "After the shape has been cut out, the cardboard is treated with a waterproof and fireproof coating specially created by Gafni, before lacquer paint is applied over the top. The "urban bike" for adults costs around £6 per unit and weighs 9kg, while the kids' bike costs £3 per unit and weighs 3.5kg. Both are made almost entirely from recycled materials and cyclists will also have the option to add an electric motor, according to the designer. Here's some more information from Gafni's business partner, ERB:
The Cardboard Bicycle Project is a new, revolutionary and green concept to produce bicycles made of durable recycled cardboard. ERB is an active partner which manages all the business and financial aspects of this project. ERB leads the worldwide business activity of the cardboard bicycle in Israel and abroad.
The first commercial model of the bicycle is designed for large companies as a vehicle for their employees and for large cities as a cheap, light-weight vehicle. Parallel to those, the electric model is being developed.
The Cardboard Bicycle can withstand water and humidity. Part of our unique technology enables us to create a product that looks like it is made out of hard lightweight polymer. The bike is stronger than carbon fibre and can carry riders weighing up to 220 kilograms. The cost to make the bicycle is around $9-$12.
Posted by Blondinko at Tuesday, October 20, 2015